Ya Filthy Animal! A Tribute to an Iconic Fictional Film

Unlike a lot of films, noir classic Angels with Filthy Souls didn’t debut as a box-office hit. In fact, critic reviews of the movie are scarce (if any), and it has yet to be picked up for syndication, recorded onto DVD or Blu-Ray, and has yet to appear on any movie streaming site. Despite this, it’s still one of the most iconic noir films of our generation, but there’s a good reason you’ll be hard-pressed to find a copy: 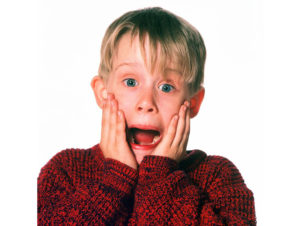 If it doesn’t sound familiar to you, Angels with Filthy Souls is the noir film that inspires Home Alone’s kid protagonist Kevin McCallister to defend house and home from the nefarious Wet Bandits. Angels with Filthy Souls promised to be the epitome of everything that a nine-year old couldn’t watch: gratuitous violence, filthy language, and hard-boiled action. In Home Alone, Kevin relishes the freedom of his empty house, indulging by eating a tub of ice cream and watching the heretofore forbidden movie. “Guys, I’m eating junk and watching rubbish! You better come out and stop me!”, Kevin yells to no one, before Angels with Filthy Souls iconic (and, well, only) scene plays out on screen.

But Angels with Filthy Souls isn’t just a parody: it’s an amalgamation of the best qualities of every crime noir film ever, from its gravel-voiced protagonist yelling Keep the Change, ya filthy animal! to its unabashed use of close-up shots and superb color grading (or lack thereof). Somehow, John Hughes and Chris Columbus perfectly encapsulate the beauty of 40’s noir films in a 1 minute and 20 second clip.

With its credible performance, an enthralling escalation of tension, and its air-tight dialogue, Angels with Filthy Souls easily became one of the best parts of an already stellar film, a succinct frame narrative that doesn’t exactly add to the main narrative, but nonetheless informs it. What’s even better: the entire scene was shot in a single day: test day before the beginning of principal photography.

Cast and crew members remember Angels with Filthy Souls fondly, describing it as an all-or-nothing shoot where they just had fun. Initially titled “Gangster Film” in the script, the producers later added the iconic title as homage to Cagney’s Angels with Dirty Faces.

That “gangster film” soon became an instant classic, even inspiring a cheeky sequel, Angels with Dirtier Faces, which debuted along with Home Alone 2. Probably one of the rare instances where the sequel was better than the movie, Angels with Dirtier Faces outclasses its predecessor in both cinematography and dialogue, with the now iconic Merry Christmas, ya filthy animal! becoming a 90’s holiday greeting staple.

In fact, Angels with Dirtier Faces became so engrained into our collective pop culture psyche that many people remember Merry Christmas, ya filthy animal! as a reference but being unaware of its origins. Well, folks, now you know.

The visual beauty of these mise en abysm was achieved by going back to basics: to get that vintage feel, director Chris Columbus shot the scene with black-and-white negative film stock as well as cinematography techniques from the 1940’s. To maximize the ambience, the production crew found an abandoned office in New Trier High School. The room was perfect: the room had Palladian windows and a pebble-textured translucent glass door. It even had venetian blinds for that sinister effect.

After finding the right room, it was just a matter of filling it with some noir staples: binoculars, cradle phone, an old typewriter, and of course, a Colt 1921AC Thompson submachine (again, another homage to Cagney). Artificial mist was also pumped into the room to give it the finishing touches.

Crazy, exciting, and bordering on the non-sequitur, Angels with Dirty Faces and its sequel Angels with Dirtier Faces played an appropriate counterpoint to their parent movie’s fun and light atmosphere, even giving birth to iconic phrases.

And so, before it turns 30, let’s not forget the best movie (and sequel) that never was. Merry Christmas, ya filthy animals.

And a happy new year.

PrevPrevious ArticleDissecting Daenerys Targaryen’s Name and Long List of Titles
Next ArticleEveryone* Can Be a Princess: Why Tinkerbell, Elsa, and Vanellope Are Not Disney PrincessesNext
Scroll to Top