Stephenie Meyer released the first novel of the series, Twilight in 2005, but it wasn’t until three years later when the iconic film adaptation Twilight was released in cinemas in 2008. Nobody knew it at the time, but the series would go on to have five more commercially successful movies, spin-off novellas, millions of fans all over the world, and a totally separate book and film franchise in the erotica genre that stemmed from Twilight fan fiction.

When you look back in 2008, it’s not hard to see why Twilight caught the fame from its demographic. The series focuses on a young, plain, and unassuming young girl who catches the attention and gets a gorgeous god-like vampire frozen in the age of 17 to fall in love with her – the ultimate fantasy for millions of teens (and even adults) out there. But 11 years later, what does the film look like to the average young adult?

The film introduces Isabella “Bella” Swan, a seventeen year old girl who decides to live with her father, a police chief in the dreary town of Forks, Washington, while her mother and her new husband move out of Arizona to settle down in Florida for his career. Naturally, everyone assumes the police chief’s Arizona-based daughter would be tanned and extroverted, but imagine everyone’s surprise when they meet a pale and shy outcast who loathes the attention everyone gives her.

Author Stephenie Meyer and screenwriter Melissa Rosenberg probably didn’t know it at the time, but the way they portrayed Bella in the Twilight novel and film arguably paved the way for young adult fiction heroines who were described as plain and unsociable yet find a way to become the center of attention and the new girl plenty of boys crush on. During her first day in school, Bella makes new friends and finds a few boys slightly attracted to her.

At lunch, Bella is drawn to the beautiful Cullen siblings, the adopted children of a local doctor, Carlisle, and his wife Esme. Bella’s friends, Jessica and Angela, explain that the Cullens usually keep to themselves, and despite their adopted sibling relationships, four of them are clearly in a relationship with each other. Bella also later learns that during the rare chance that it’s a sunny day in Forks, the Cullens are always absent under the excuse that their parents take them camping.

During biology class, Bella sits next to the fifth Cullen sibling, Edward, but he appears to be disgusted by her presence. A week after his absence, Edward tries socializing normally with her, but is still elusive. One day, Bella nearly becomes a casualty in the school parking lot when a driver loses control of his van. However, she sees Edward run to her side despite the distance between them and pushes the van away with one hand, leaving a huge dent. When Bella tries to confront him about it, he denies it and claims she imagined it. Bella decides to investigate if there is something paranormal about Edward.

Bella does research and notices that Edward has powers resembling those of a vampire. She tags along with Jessica and Angela to buy dresses from prom in the neighboring town of Port Angeles, but separates with the group to head to a book store about local Quileute legends that reference vampires. On the way back, however, she is cornered by four drunk men who intend to rape her, but Edward arrives just in time to save her and drive her away. 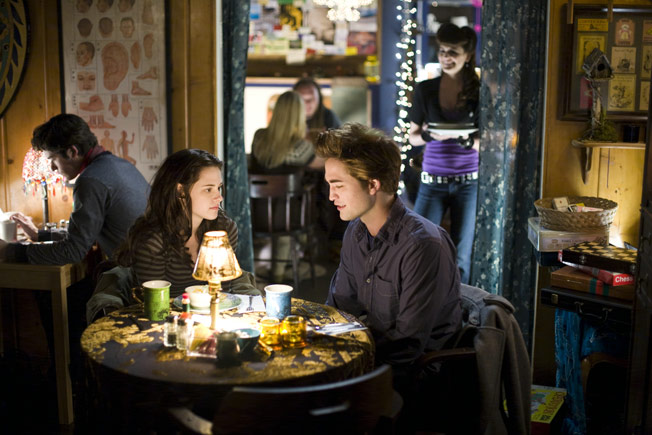 Edward takes her to dinner to help her recover from the incident. She suspects Edward of being a vampire, but she doesn’t say it in public and asks him questions that only solidify her suspicions. A few days later, she confronts Edward about her suspicions, and he confirms it: he and the other Cullens are vampires, but they only consume animal blood. Despite the dangers of her being with him, they fall in love and start dating. Edward introduces Bella to his family who, aside from his sister Rosalie, welcome her.

“You Brought a Snack.”

In one of the most iconic scenes in this film, the Cullens plus Bella decide to play baseball in the midst of a thunderstorm. However, they attract the attention of three nomadic vampires: James, Victoria, and Laurent. James, who likes hunting people for sport, is driven to hunt down Bella due to Edward’s protectiveness.

The Cullens hide Bella in Phoenix, Arizona, but James lures Bella by claiming he has her mother hostage. James bites Bella, infecting her with vampire venom, but Edward, Alice, Emmett, and Jasper subdue and kill James after a battle and Edward stops Bella turning by removing the venom.

In the end, Edward takes Bella to their high school prom. Bella tells him she would be safer if he turned her into a vampire, but he refuses. Unknown to them both, Victoria is watching them and is slowly plotting her revenge for James’ death.

Looking at Twilight almost 11 years after its release, I can see how different the reception to this film would be if it were made today. While having a perfect supernatural being fall in love with an ordinary-looking girl is a fantasy of many girls out there, the way Bella is portrayed is sure to come off as anti-feminist. While Bella insists that she makes her own choices, a lot of these choices lack a lot of self-preservation.

And in several occasions, Bella actively puts herself in danger and requires Edward’s help to save her: she needs Edward to save her from the van, from the drunken would-be rapists, and from the vampire trying to hunt her down. While Bella makes choices to stay or leave, she is still put in the position of some damsel in distress who needs a hero to always come save her.

You also have to remember that 2008 was a time where the internet hasn’t totally boomed yet and anyone without a social media account wouldn’t necessarily be considered as going against the grain. I can’t imagine the Cullens, having to assimilate with their peers and not make a huge scene, being forced to have their own social media accounts to blend in. Alice, Emmett, and Rosalie can easily blend in, but seeing Edward and Jasper – who are at least a hundred years old and have the personality of a grandfather – will definitely struggle and may end up as those guys who claim to avoid social media because it’s too mainstream.

While Twilight would have been problematic if it were released today, its position in our pop culture past has created a foundation for supernatural teenage romances and all other similar young adult novels and films. It’s not the film of our time, but it at least it was an entertaining movie that started the next few movies we’d all definitely watched later on.