The Velocipastor: So Bad That It’s Good?

People have always held a strange fascination for B-movies, so much so that entire sub-cultures dedicated to the study and appreciation of these sub-par-so-bad-its-good pieces of film have existed for as long as movies have existed.

But what exactly constitutes a B-movie? During the Golden Age of Cinema back in the 30s and 40s, B-movies were pretty much any kind of movie that operated on a shoestring budget and was shown at the bottom half of double features, kind of like the B-side of an album.

The lack of a budget meant that a B-movie usually starred no-name artists, below-average production quality, and questionable script writing. This also meant, however, that B-movies were a way for up-and-coming actors, actresses, directors, and scriptwriters to really flex their creative muscles and explore various, often hammy and cringey, ways of telling a story.

Granted, films like Twilight are also hammy, cringey, and starred up-and-comers, but they had multi-million dollar budgets that should have prevented those things.

This is also the reason why some people love B-movies so much, especially in the modern age: B-movies are a great way to express creative stories without the need for expensive special effects, overrated celebrities, and a storyline that pandered to mass audiences.

In a sense, B-movies are an art form, and in the case of The Velocipastor –a movie about a priest who has the power to turn into a killer dinosaur after being cursed by an ancient artifact –is a concept that actually holds true, elevating the whole concept of a movie being “so bad, it’s good”. 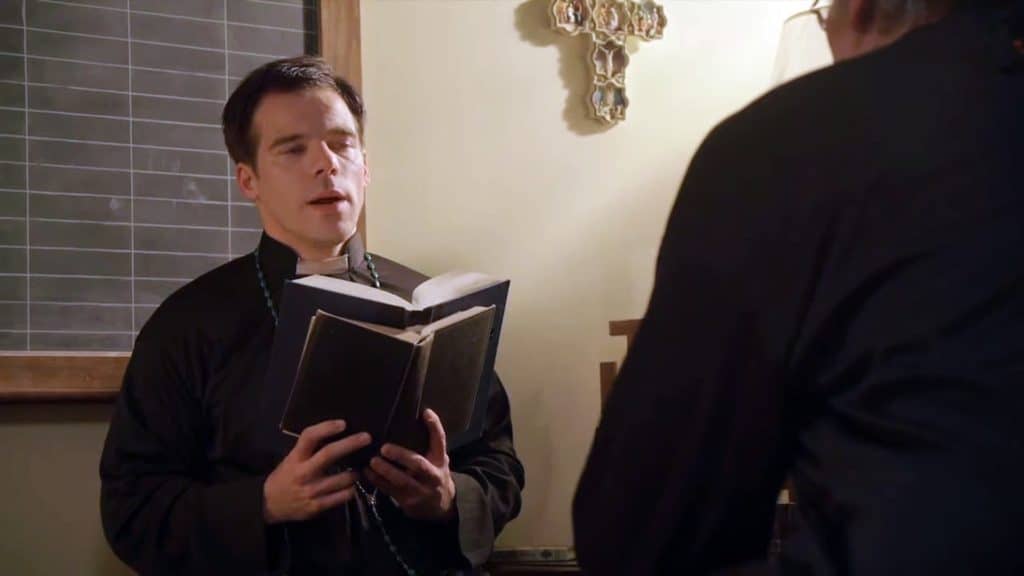 The plot of The Velocipastor is…unique, to put it lightly: after losing his parents in a horrifying car fire, Father Doug travels to China on a spiritual journey. During his adventures in the Far East, Father Doug happens upon a group of ninjas who are chasing after an ancient artifact that is said to turn the possessor into the Dragon Warrior. Father Doug manages to acquire the artifact, which turns him into a dinosaur whenever he’s angry, and after some convincing by his new prostitute-friend Carol, decides to use his powers to rid the world of crime.

At some point there’s also a scene with Vietnam flashbacks, a Voodoo witch doctor, oh and, the ninjas turn out to be Christian Ninjas who plan to use cocaine as a way to get people closer to the Church. There’s also a pimp, at one point.

…like I said, the plot is unique. But is it really that weird, considering plot points from, say, the DC comics can also delve into the surreal and absurd (remember when Superman went toe-to-toe with Muhammad Ali?).

Velocipastor: A Joke That Was Taken (Too) Far

If the plot of The Velocipastor sounds like a joke, that’s because it is: during his time in the School of Visual Arts in Manhattan back in 2010, director Brendan Steere noticed that his phone had auto-corrected the word ‘velociraptor’ into ‘Veloci Pastor’. Steere would later on use this concept in a class project wherein he created a series of grindhouse-style movie trailers, one of which was a prototype of The Velocipastor.

And while the project itself went well, Steere didn’t think much of Velocipastor after that; that is until he uploaded the files onto YouTube and received tens of thousands of views within a few short hours. From 2011 to 2016, two attempts were made to crowdfund the project and turn it into a feature-length film, with the filmmaker finally finding a private investor (i.e. the friend of the mom of the director’s friend) to the tune of a cool $35,000 (for reference, a 30-second TV ad costs around $120,000).

The Velocipastor saw limited release back in the spring of 2017 in Portland, Oregon. After a surprisingly successful premiere, the film went on to become a part of various film festivals on the West Coast, eventually securing a wide-release deal from Wild Eye Releasing in 2018. Although revenue numbers and gross income reports are scarce, it’s safe to assume that Steere and his crew managed to recoup most, if not all, of their initial investment. What started out as a tongue-in-cheek school project has since become a cult classic that has seen wide release in cinemas, DVD, and lately, streaming sites.

All of this because of a crappy auto-correct from an iPhone.

But is Velocipastor Actually Good?

Short answer: yes, The Velocipastor, despite its kooky title and plot, is actually a really good piece of horror-comedy. If you can, buy a copy or stream it from a streaming site and enjoy it with a few friends for your next horror movie night.

Long answer, The Velocipastor is not a film that takes itself seriously; after all, the name is Velocipastor. There’s really no way to make a movie about a priest who turns into a dinosaur into anything that isn’t a satire of itself and the genres it pays homage to. In this regard, Brendan Steere manages to create a piece of comedy gold simply because he created something that was to be taken at face value. It’s a joke film, and it knows it’s a joke film, and it’s not going to try to be anything but, because anything beyond laughing at the idea of Christian Ninjas fighting a dinosaur priest would be contrived.

That being said, the movie isn’t perfect: the acting can be hammy, some of the lines were cringey, and the effects were shoddy. These are, of course, to be expected on a $35,000 budget, but perhaps The Velocipastor’s biggest flaw is that it’s a joke that went on just a little too long. The Velocipastor’s run-time is at 75 minutes, the bare minimum required for any film to be considered a feature film.

Therein lied the problem: had the movie been shorter, by say, 15 or 20 minutes, it would have been a near-perfect B-movie that encapsulated everything that made the genre an art form: it would have been funny, endearing, and an entirely unique storyline that would have given Infinity War a run for its money. However, because it needed to be a feature film, that extra 15 to 20 minutes had to be filled in with schlocky shots and unnecessary plot points that should have stayed on the cutting room floor, so much so that the movie does feel draggy after the half-hour mark; makes sense, considering the one-dimensional humor of a crime-fighting priest who turns into a dinosaur. And, quite frankly, The Velocipastor did more in terms of storytelling and character-building than major blockbusters like The Hobbit: An Unexpected Journey (which, in our opinion, was an unexpected disappointment).

Despite all of its shortcomings, however, The Velocipastor delivers honest laughs in pretty much every scene, whether it’s by the absurdity of playing sight gags straight or by the simple surrealness of watching characters ignore the ridiculousness of it all.

To say that The Velocipastor is “so bad, it’s good” doesn’t do it justice: it’s a good piece of film, period.

If you enjoy supporting independent directors and unique films, buy the DVD and help make the sequel a reality.