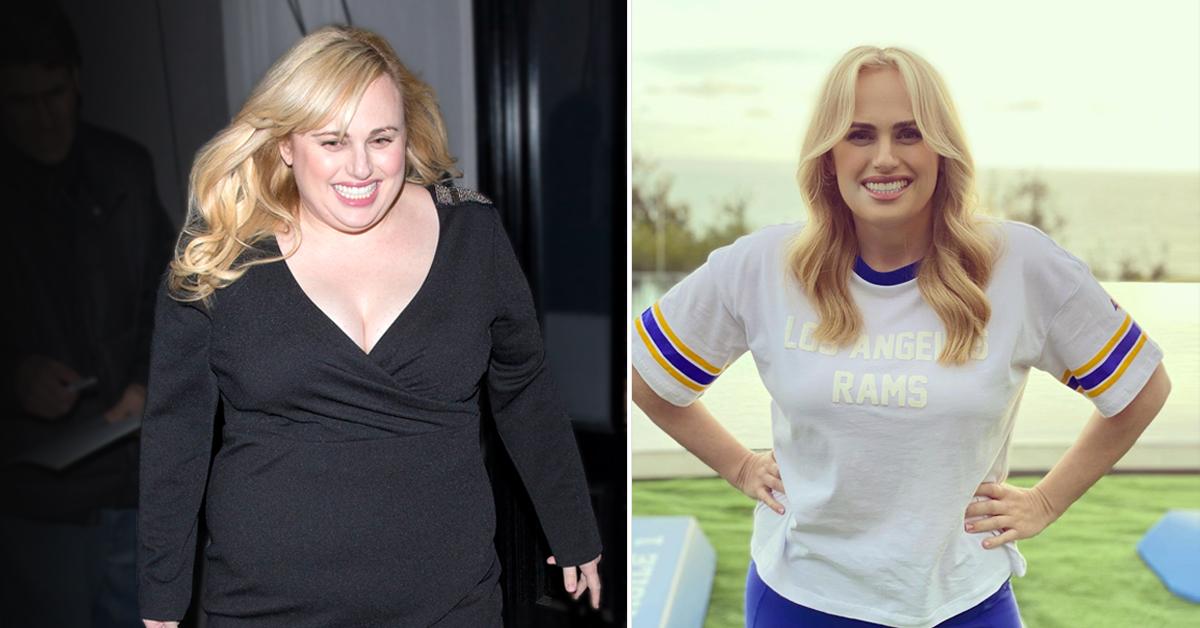 When the world first met Rebel Wilson, she was just Fat Amy from “Pitch Perfect.” People knew her for her boisterous attitude and her plus-size goodness. The “Pitch Perfect” actress was the “funny fat girl” (as she described herself) of Hollywood. Even her character Amy has the word “fat” attached to it.

So when she declared that 2020 would be her “Year of Health,” people anticipated how Fat Amy would go about it. Plus, was it even possible to see Rebel Wilson minus her plus-size trademark? Needless to say, people were torn with her declaration — with some believing that she can go through with her “Year of Health” and others thinking of it as a massive joke.

Except it wasn’t and Rebel Wilson’s weight loss is ALL that people talk about these days.

A year ago, “The Hustle” actress celebrated the milestone of achieving her weight goals a month earlier than she anticipated. To date, Wilson has lost more than 77 pounds, which exceeded her original goal of weighing 165 pounds. She has also seen drastic improvements in her health.

How did Rebel Wilson achieve such a drastic weight loss?

How Did Rebel Wilson Lose Weight?

The actress had lost eight pounds when she decided to increase the frequency of her workouts. Apart from working out, Wilson also spent four days at a luxury weight loss, fitness and wellness retreat in Malibu called The Ranch.

Since then, the actress has been all about living a healthier lifestyle. She started off with simple workouts, which mostly consisted of walking. At the same time, she shared fitness motivational posts with her followers. In 2019, she shared a video of her going on a morning stroll with a caption that encouraged her fans to appreciate their bodies by “being kind to yourself and loving yourself.”

As mentioned above, she took things a step further when she declared 2020 would be her “Year of Health,” which involved her putting on athleisure, going out for walks and avoiding junk food and sugar. She declared the change would be a difficult one, especially since she committed to it right after the holidays, aka the season of endless feasts. Still, Wilson moved forward with a post of herself posing at the beach, which she captioned, “Who’s with me in making some positive changes this year?”

Wilson is thrilled with her progress and has a newfound respect for her body. Last January 2021, the actress posted a gorgeous selfie with a caption that encouraged fans to look at themselves in the mirror and be proud of what they see.

How to Lose Weight: The Rebel Wilson Way 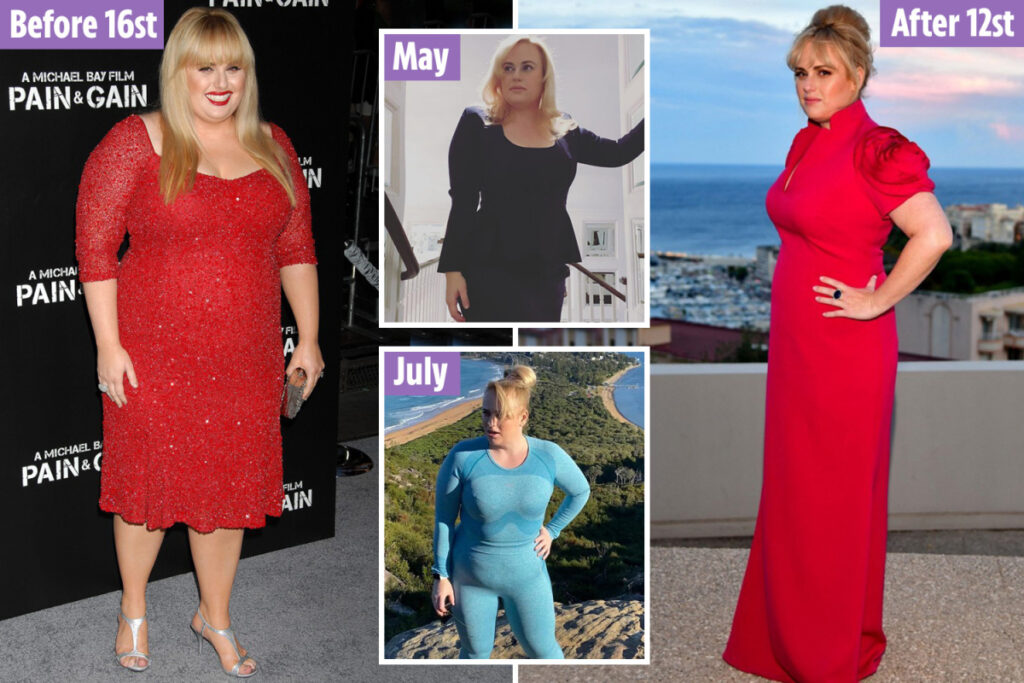 So what is the secret to Rebel Wilson’s weight loss? Does she eat salad like the Kardashians? Is she on a special diet? Who’s her celebrity trainer?

The good news is Rebel Wilson’s weight loss strategy is pretty doable — if you don’t include her four-day hikes. She might have a robust exercise routine, but the rest of her fitness plans can be done by anyone. As long as you have Wilson’s level of patience and determination, you too can build up your body and your health.

Here are some notable facts about Wilson’s fitness journey.

She Manages Her Emotional Eating Urges

One of the biggest lessons Wilson learned during her fitness journey is how to deal with her emotional eating. In a candid Instagram post last August, the actress shared that she used to depend on food to numb her emotions. When she was at her unhealthiest, Wilson indulged herself in “way too much” junk food to help her cope with her circumstances at that time (her father had just passed away from a heart attack).

In an interview with Cosmo, Wilson revealed her complex relationship with food.

In the post, the actress empathizes with people who are going through the same challenge. As an encouragement, she tells her fans that it’s not too late to start improving and trying to be the best version of themselves. She caps off her encouragement by telling everyone to “keep smiling and keep trying to be active!”

She’s Not Too Harsh With What She Eats, Though

At the beginning of her fitness journey, Wilson followed a diet plan to achieve her goals. Her plan included a reduction of gluten and sugar intake and a focus on foods with high alkaline content, which included fresh fish, sheep’s milk, vegetables and yogurt.

Now that she has hit her weight loss goals, Wilson has eased up when it comes to the food she eats. This year, she’s all about maintenance. According to the actress, her diet focuses more on balance. Since she’s not trying to lose weight anymore, she’s enjoying more snacks, which include the occasional chocolate and ice cream.

Rebel Wilson has long noticed the stylish and pleasant design, convenient and intuitive operation, easy registration – and these are not all the advantages of the virtual casino http://cosmolotcazino.com. The operator offers you an impressive collection of top slot machines, table games and entertainment with live dealers, which can be played both for money and without investment. Newcomers can get up to 50,000 UAH for registration and 300 free spins, and customers can also try their luck in exciting tournaments and lottery draws with generous rewards.

While Wilson’s diet gives her more legroom to enjoy snacks, she still incorporates healthy food into her favorite meals. For example, she adds shredded avocados and carrots to her tacos.

She Makes Adjustments to Her Workout Routines

Initially, Wilson’s workout strategy seems like a difficult one. She is known for her love of hiking. In 2020, she posted a photo of herself hiking, which was immediately flooded by comments from fans that applaud her healthy attitude to weight loss (just like Amy Schumer and Adele). According to the actress, she prefers doing the physical activity outside, which is the secret behind her drastic weight loss.

While her routine is pretty robust, it’s something everyone can do. The “Pitch Perfect” doesn’t believe in doing extreme workouts. Instead, she performs routines that “feel good.” Wilson thinks of exercise as an activity that one should enjoy. If she feels like walking, she’ll go for a light walk. Instead of “killing yourself at the gym,” as she puts it, she encourages everyone to do workouts that they’re comfortable with.

She Makes Time for Self-Care

Of course, self-care is important in any weight loss journey. Wilson’s self-care routine includes soaking in a bath with Epsom salt, taking her vitamins and resting.

Rebel Wilson’s fitness journey is an inspiring one. It’s not a story of strict diets, salads and hard workout routines. It’s a journey of determination, patience and loving yourself. It’s a story that everyone can relate to.