Amy Schumer’s Weight Journey: Size Should Never be an Issue

Actress Amy Schumer is probably one of the most relatable celebrities out there. Unlike other Hollywood stars who revel in glitz and glamour, Schumer isn’t scared to share her unfiltered life. From her no-makeup appearances to her filming herself finding out she’s pregnant (while she’s on the toilet, mind you), she says things most people say (even if they are unaware of it).

One of the most relatable and lesson-filled aspects of Amy Schumer is her weight loss, particularly her journey post-pregnancy.

What makes the actress incredibly relatable is her take on body image, especially her struggles. When it comes to Amy Schumer, weight is always a discussion. She wasn’t the obese type but Schumer was unlike most of today’s actresses: skinny and sexy, even after giving birth to kids. She was just like the rest of us — and she didn’t have fun 100 percent of the time.

Although she’s an accomplished entertainer with a net worth of $25 million, Amy Schumer struggled with weight loss, Lyme disease and the public’s judgmental eye. Nevertheless, Hollywood’s Queen of Comedy continues to inspire others with stories of staying healthy and still loving your cellulite.

How Much Does Amy Schumer Weigh? Her Weight Journey

Currently, the actress weighs 161 lbs (73kgs). According to Schumer, she is “very fat” by Hollywood’s standards. She doesn’t care about it now. But her journey wasn’t always easy.

Before she was Amy Schumer the Actress, Schumer was just a normal girl was always “the big kid.” When she was in sixth grade, the actress wore a new outfit — a tight ribbed shirt paired with tight black pants. Upon her arrival at school, a boy looked at her and exclaimed, “Whoa, Big Bertha!”

In her interview with Glamour, Schumer expressed her initial dislike of being called “big” by other kids. But while the moment “robbed” her and caused a slight setback in her confidence, she made fun of herself instead.

Schumer regained her confidence when she joined her high school’s volleyball team. The senior boys from her school started attending the games to cheer on her and her booty shorts. Since she had more positive feedback for her weight this time, Schumer felt more beautiful.

In college, however, her confidence was shaken again. During her time at Townston University, Schumer was surrounded by other students, particularly girls who were “prettier and skinnier” than her. During her freshman year in college, her peers judged people solely on their appearance. She lost most of her self-esteem during this year.

Since gaining attention in 2007 for her standup comedy prowess, Schumer had been steadily rising up the Hollywood ladder. In 2015, she starred in “Trainwreck,” a romantic comedy directed by Judd Apatow.

During this time, Amy Schumer was introduced to weight loss as a “need” in Hollywood. According to the actress, an insider in the industry said that if you weighed more than 140 pounds, “it will hurt people’s eyes.” So she bought into the idea and started losing weight.

When she got thinner, however, Amy Schumer didn’t think she was sexy. She thought of herself as “stupid skinny” since her body proportions were uneven. Still, her pursuit of a better public image drove the actress to “attempt” to have an eating disorder, a journey that lasted only two hours when she realized hunger was never an option for her.

Despite sizing down to a size four, the public still called her “big” or “heavy.” 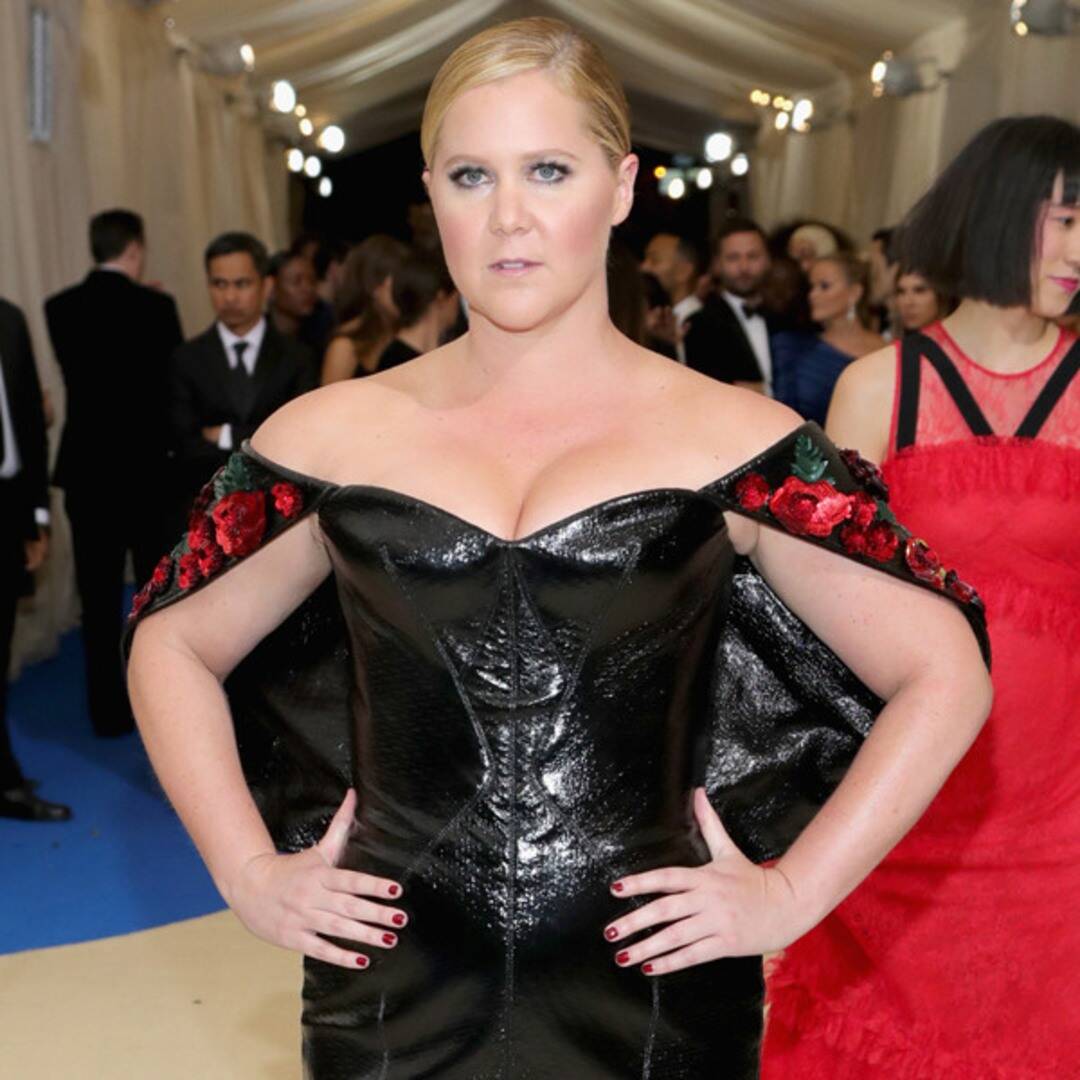 In 2017, Amy Schumer weighed 160 pounds and DID NOT CARE. During an interview with Jimmy Kimmel, she called her weight gain “cool.”

In 2018, Schumer portrayed Renee in the film “I Feel Pretty.” Renee was a thirty-something woman with a low self-esteem who wishes to be pretty. During a SoulCycle class, Renee ends up accidentally going too fast and flies off her bike, causing a concussion. When she wakes up, she believes that her appearance has magically changed; thus, increasing her confidence.

She received backlash as many people thought the film claimed that people who are overweight are insecure. On the contrary, Schumer claimed her intention was to empower women, to encourage them to be confident despite of what the world thinks about them.

During her pregnancy, Schumer suffered hyperemesis gravidarum. She experienced persistent vomiting and nausea, as well as dehydration and weight loss. But like any normal expecting mother, she gained a bit of baby weight.

After giving birth to her son, Amy Schumer was at the center of weight issues again as she struggled to cope with post-partum recovery. But the comedienne focused more on her newborn to mind the critique of others.

Her post-partum weight was brought to the light again (in a fun way) when she commented on an Instagram post by Jessica Simpson. Simpson showed off her 100-pound weight loss after giving birth to her third child. Schumer poked fun at the actress by saying she lost ten pounds and a hundred dollars by playing poker with her sister. She capped off her comment with a #norush hashtag, reminding all mothers that everyone has her own pace when it comes to post-partum recovery.

Simpson paid the favor by commenting on Schumer’s Instagram, praising her for being hot despite the less dramatic weight loss. According to her, “Size only matters when it comes to men.”

In 2020, people noticed that Amy Schumer started to drastically lose weight and they thought it was a good thing. After all, she had always been the center of body image issues. But for the actress, her recent weight loss isn’t one for celebration.

In September 2020, Schumer revealed that she had been diagnosed with Lyme disease, a condition caused by certain species of ticks. Common symptoms of the disease are muscle pain, rash and tiredness. Weight loss can also be a symptom of Lyme disease, as manifested by the actress.

According to Schumer, the tick-borne infection caused her to lose a couple of pounds. Unfortunately, many people complimented her on this weight loss. Her story of being congratulated for her Lyme disease-related weight loss reminded us of one thing: it’s never OK to comment on another person’s body.

How Did Amy Schumer Lose Her Baby Weight? The Healthy Take on Her Weight Loss 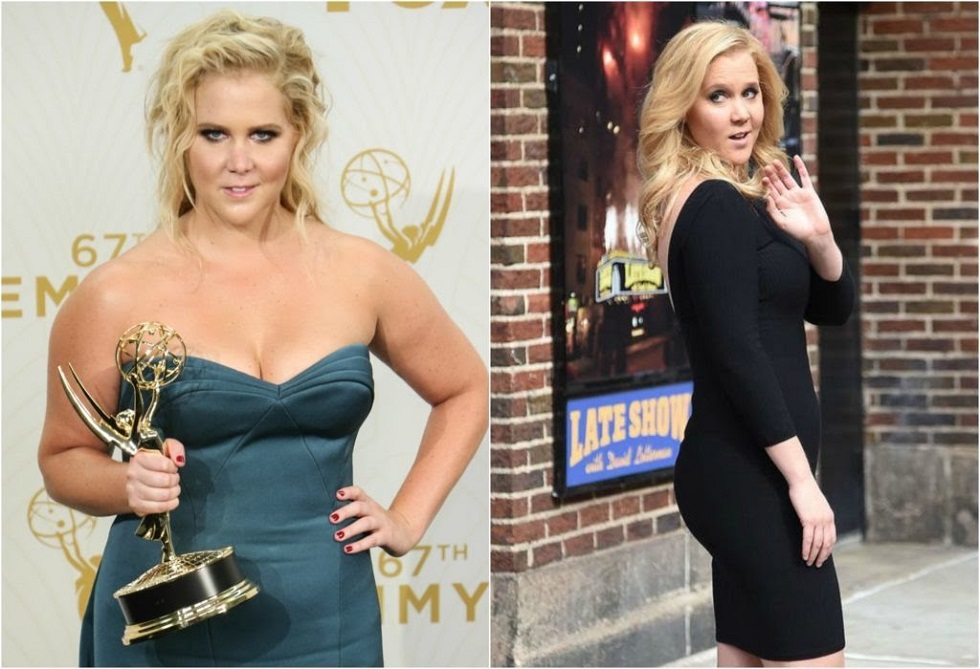 Lyme disease aside, Schumer did practice healthy habits to keep her body strong. If you want to lose weight the healthy way, consider her techniques.

Amy Schumer’s trainer, Harley Pasternak, was not initially impressed with the actress’s eating habits. To help her become healthier, the trainer designed a diet plan that trimmed down her breakfast routine to a smoothie. She didn’t have light meals throughout the day either. Simply put, she only ate what she needed — that’s how she stayed healthy.

But just like the rest of society, the actress isn’t afraid to eat what she wants. Amy Schumer’s weight loss can be attributed to diet, but she orders what she craves. If the occasion calls for a sub sandwich, she will get that sandwich. In fact, the “Trainwreck” actress confessed to really hating being hungry.

In an interview on the show “The Project” from Australia’s Channel Ten, Schumer revealed her diet philosophy: Exercise and eat well. Don’t starve yourself.

Plus, Schumer is married to a chef named Chris Fischer, so eating is a part of daily life. She’s unafraid to eat, which is a refreshing attitude to weight loss and diet. Even her critics can’t compromise her love for food. What they think about her body won’t stop her from consuming her favorite junk food occasionally.

Pasternak raved about Schumer’s dedication to the training, saying that she’s “naturally an athlete.” Throughout high school and college, she played high-level sports. The trainer also compliments Schumer, saying that she is very coordinated and easy to train in the gym.

Schumer practiced a “strong in the gym, lean in life” mindset when it came to working out. All of her workouts were brief but she would always stay active. The comedienne preferred to go out for a run. Instead of driving around, she tried to walk everywhere she could, including her travels to her studio.

Schumer is a big fan of how she looks. She has been outspoken about not getting surgeries for herself. She is also adamant against retouching how she looks onscreen. In “I Feel Pretty,” there was a scene where she wore a bikini among a group of statuesque girls. When she was asked if she wanted to retouch her body, she said no. No matter what she wears, Schumer believes she is beautiful in it.

Touching on the topic of changes this year, the lives of many people have changed a lot. Investing in the long term is scary now, and buying real estate only freezes money without any special forecasts for growth. Probably everyone this year thought about investing in cryptocurrency. Answers to all questions about crypto can be found in the blog

Amy Schumer’s Weight Positivity: A Practice for Everyone

From a career standpoint, Amy Schumer considers herself good-looking enough to work in Hollywood. She gets enough attention from people that she feels good. She sees photos of herself then and now and she’s not scared to notice the significant differences in her body.

Being the comedienne that she is, Amy Schumer also laughs about her weight gain and loss. On Jimmy Kimmel, the actress hilariously addressed the comments people make about her body online. She said that she is “blessed” with people who often give feedback on her appearance and went on to thank everyone for their “feedback on my face and body.”

So what can we learn from Amy Schumer’s weight journey?

First, put things in perspective. It begins with how you feel about your body. You must love your body. You have to feel good in your skin. When you don’t like how you look, put things into perspective. Amy Schumer has bad days with her body, too. During these days, she shares that her dad, who is in a wheelchair, reminds her why she should be grateful. According to her father, she should be grateful since she can move and she’s alive. Schumer shares that her father believes that she can feel good if she wants to.

Second, accept that you can’t please everyone. Even though Schumer lost a lot of weight for “Trainwreck,” she still faced criticism. Everyone’s going to have a say on how you look, so might as well do things for yourself instead of for others.

Finally, love yourself! Enjoy what you can do!

Amy Schumer and her weight journey shed light on the reality that weight changes are caused by different factors: medications, eating disorders, grief and trauma, reproductive health issues — just to name a few.

On top of that, complimenting a person on their weight loss, especially if you don’t know if they intentionally wanted to lose weight, implies that you think a smaller body is better than regular body types. This is never true. As Schumer proves, all bodies are beautiful.

Facebook
Twitter
Pinterest
Email
PrevPrevious ArticleHow You Can Start Your Lifestyle Business
Next ArticleWhat Would Be the Order of the Twilight Sequels If Midnight Sun Was Released?Next